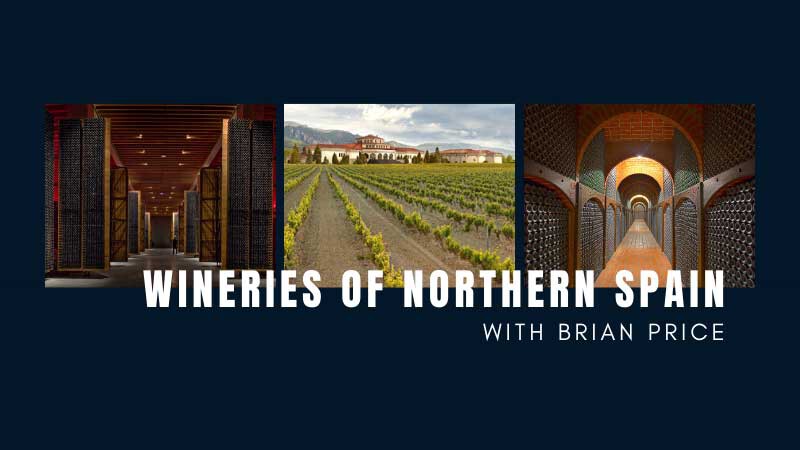 Salud! A Wine Tour of Spain

Recently, I was given the opportunity to return to Spain, and I didn’t hesitate to say yes. I was particularly excited that on this trip, I’d get to focus my travels on just a few specific areas of the country rather than a whirlwind tour of the whole country.

Our first stop in Spain was Bodegas Portia in Ribera del Duero. Upon approaching the winery, you might suspect that you were about to enter the lair of a James Bond villain. Its sleek architecture is the result of a group effort between Grupo Faustino and famed British architect Norman Foster. The building is shaped like a three-pronged star, which also inspired the Portia label design. The prongs of the star are actually slanted roads enabling trucks to carry grapes from the harvest area right to the top of the winery. Grapes are then dumped into the “star’s” center, where they begin their transformation into wine.

The design of the facility inside and out is simply jaw-dropping. The layout of each wing is almost perfectly symmetrical, and this impeccable attention to detail is a feature of all of Grupo Faustino’s wineries (and wines). Each of the building’s three wings is dedicated to an aspect of winemaking. One wing is comprised of fermentation tanks, one of aging barrels, and one of aging bottles. Portia’s barrel room is absolutely stunning: thousands of barrels sit in a large, dark hall, with soft (almost ominous) red lighting illuminating the room from the side walls. The bottle room is just as impressive: lining the walls, dozens of tall racks house close to 500 bottles each.

Despite these impressive views, the tasting room was my favorite. The wines were exceptional. I found them to be stylistically in-line with the winery itself: streamlined, bold, and superiorly balanced. The Crianza and Triennia stood out from the group as absolutely showstopping Tempranillo. Bodegas Portia offered some of the best showings I’ve ever had of this varietal from Ribera.

The next day, we travelled northeast to Bodegas Campillo in Rioja Alavesa. I knew we were going to be treated to something special when the morning rain subsided upon arrival and vibrant double rainbow arched over the vineyards.

Bodegas Campillo is one of the few wineries in Rioja that is a Bordeaux-style Chateau. Their vineyards surround the winery building, vastly different in style than the “high tech” Bodegas Portia we had visited the day before. Bodegas Campillo exudes class, elegance, and sophistication, which translates into the wine they produce.

The first floor doesn’t concern itself with any aspect of wine or winemaking: it’s actually an art museum, showcasing the likes of Maldonado and Estartus. After admiring the works, we descended a spiral staircase to the barrel and bottle rooms. I’ve never seen anything like the bottle room at this winery. Each bottle is hand-stacked in such a way that the bottle shape evenly disperses weight. Our guide said that not one of the 500,000 bottles in the room will be more than one millimeter in front of or behind the bottles next to it, ensuring that their weight is shifted safely. This attention to detail is exactly what one would expect from Grupo Faustino.

The wines, while also being Tempranillo-based, were distinct from the offerings of Portia. Here, there’s a longer growing season due to the cold mountain nights. The resulting slower ripening presents itself in deeper, darker fruit flavors with notes of blackberry and baking spice. It is always fascinating to see variations between the same grape, used by wineries just hours from one another other. The Campillo Reserva and Raro were the big standouts in the Bodegas Campillo tasting room.

Finally, we headed over to the “OG” of Grupo Faustino’s wineries, the largest exporter of quality wines in the area and the aptly named Bodegas Faustino. Faustino focuses on nature, terroir, and sustainable farming practices. These rustic offerings have a deeper sense of the earth in which the grapes are grown.

While Faustino revels in a traditional approach to winemaking, the facility and production is by no means small. At any given time, the barrel room holds over $40,000,000 worth of unused oak barrels, just waiting to be filled, along with thousands of full barrels aging iterations of Tempranillo-based wine. The people at Faustino are incredibly patient when it comes to the aging process. For example, just because a wine like their Crianza hits the legal aging requirements (at least 1 year in barrel and 1 year in bottle) doesn’t mean they release it at that time. Occasionally, their Crianza has aged up to three years before reaching the winemakers’ standard.

We were also shown the “vault” which houses wines in personal lockers for prominent people, like Spanish royalty, or places, like Pebble Beach. Finally, we ended up in the quaint tasting room, with memorabilia from Spanish soccer teams, and signed jerseys from the other big sport in Rioja, handball. Our hosts had prepared a lunch for us, during which we tasted some back-vintage wines such as the 2004 Gran Reserva and the 1970 Gran Reserva. The ability of these wines to continue evolving over such lengths of time while still holding on to their character and body is a testament to the superior winemaking at Faustino. These wines are not to be missed.

The last leg of our trip took us to the city of Bilbao, close to the north coast of Spain, in the heart of Basque country. It’s also home to one of the worlds few Guggenheim museums, of which we were fortunate enough to get a private tour.

Wines made here are drastically different than the rest of Spain due to the area’s cold, rainy weather. They are known for a wonderful white wine called Txakoli (Chalk-o-Lee) which is primarily made from a little-known varietal called Hondarribi Zuri. These wines are incredibly refreshing with a slight fizz and apple cider-like flavors. They aren’t readily found here in Kentucky, but if you’re fortunate enough to come across one, don’t hesitate to pick it up.

All in all, this was a fabulous experience. Being able to dive into the culture of these few areas was incredibly enriching and educational. If you’re a wine love who’s never visited Spain, make it your next stop! In the meantime, keep an eye on your local Liquor Barn or Party Mart, as you start to see some of our favorite Spanish wines hitting shelves in the near future.